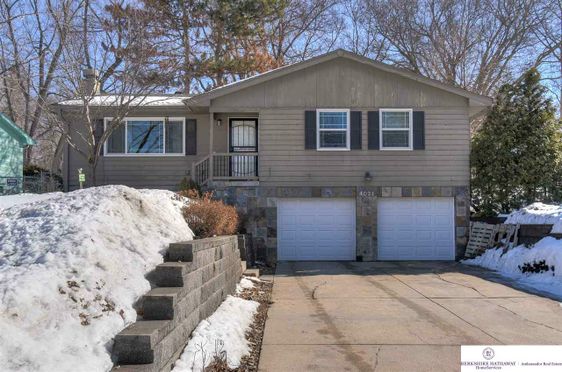 Check out this gem nestled on over a 1/4 acre lot. This one you can truly move right into without having to lift a finger! Some of the things you will love about this home are: beautiful hardwood floors, large bedrooms, updated and upgraded baths AND THE KITCHEN....well you will love all of the upgrades and cooking & baking while peeping out the window to your backyard sanctuary. This time of year you can't see all the wonderfulness this backyard has but you will get an idea of the privacy afforded to you with a yard this size.

Raw land purchased by Omaha investor William Paxton Sr. south and east of 90 th and Fort Street in 1867 was almost immediately changed with the addition of roads and numerous trees.  Later the area became known as Keystone Park Neighborhood with 78 lots ranging in size from two to twenty acres.  Homes, many of them “summer cottages” for Omaha’s elite, were built on most of the acreages, and little change occurred in the area until the mid 1900’s. At that time, the population of Omaha was moving westward, and investors saw these large lots as prime candidates for further sub-division.   They purchased the acreages, retained the homes built upon them and sub-divided the remaining land into lovely tree-lined neighborhoods with generous lot sizes on curvilinear streets.  Later other homes were built on smaller lots on more traditional street patterns, but Paxton’s original roadways remained and were eventually paved for homeowner’s convenience.  Today the area retains much of the charm of its earliest stages of development along with homes of many ages, styles, and  sizes. Democracy Park, found in the northwest area of Keystone, is important to many Omaha bicyclists, walkers, and joggers.   In 1989 an abandoned railroad track in the area was developed as the start of the Keystone Trail.  Today the trail runs southeast across the city of Omaha to 36 th Street in Bellevue where it connects with the West Papio Trail, making it one of Omaha’s most popular trail systems.  Other parks in the area are Keystone, Pilster, and Templeton, which provide green space for leisure activities.  There is also a Keystone Little League Baseball facility.  One of Omaha’s finest public golf courses, Benson, is near the development. The area is served by Omaha Public Schools and various parochial entities.  Both Boyd and Adams Elementary Schools have a close relationship with the Keystone Park Neighborhood Association which lists school activities in its quarterly news letter and awards scholarships to outstanding alumni from each school.  The Association’s newsletter is probably one of the most complete neighborhood publications in Omaha.  It provides information about community activities (the annual Pageant of Lights) and fund raisers (the annual Chili Feed) , as well as phone numbers and contacts with Omaha city government.  Special information is provided about the Citizens Patrols in the area, the Keystone Garden Club and Keystone Neighbors.  Keystone is literally close to almost everything:  grocery stores, shopping of all kinds, churches of many denominations, restaurant and entertainment centers, employment sites, and schools.  And while home owners appreciate these amenities, they more often mention, a caring neighborhood with a sense of community, the trees, and quiet streets as reasons for living there. For more information contact www.keystoneneighborhood.org

We have mortgage solutions for your homeownership aspirations. When you’re ready to look or buy, or possibly refinance, I’ll put my expertise to work and be with you every step of the journey.

Count on a personalized and seamless experience—all the way to closing. Start the pre-qualification process by using our easy online application!

View All 44 Listings
Presented By

This data was last updated on Jun 19, 2021. The data is subject to change or updating at any time without prior notice. All properties are subject to prior sale or withdrawal. The information was provided by members of The Great Plains Regional Multiple Listing Service LLC Internet Data Exchange or members of the Broker Reciprocity program of the Southwest Iowa Association of Realtors (SWIAR) and is copyrighted. Any printout of the information on this website must retain this copyright notice. The data is deemed to be reliable, but should be independently verified as no warranties of any kind, express or implied, are given. The information has been provided for the non-commercial, personal use of consumers for the sole purpose of identifying prospective properties the consumer may be interested in purchasing, and any other use is prohibited. The listing broker representing the seller is identified on each listing.

You just added a property to compare. Add at least one more to start comparing.
Sign in or register to favorite properties.